At a joint press conference, Fidesz MEP Balázs Hidvéghi along with MEPs of the European Conservatives and Reformists (ECR) Jorge Buxadé (Vox) of Spain and Vincenzo Sofo (Brothers of Italy) of Italy condemned the report attacking Hungary, which was signed by French Green Party rapporteur Gwendoline Delbos-Corfield.

Balázs Hidvéghi stressed that it is quite astonishing what the left in Brussels is doing. “Europe is suffering from an economic and an energy crisis caused by the war and Brussels sanctions, and in such a serious situation, the European left’s main priority is still to attack Hungary and blackmail it using EU funds”, the MEP noted.

In a letter, liberal MEP Guy Verhofstadt has called for the European Parliament to once again condemn Hungary in an […] 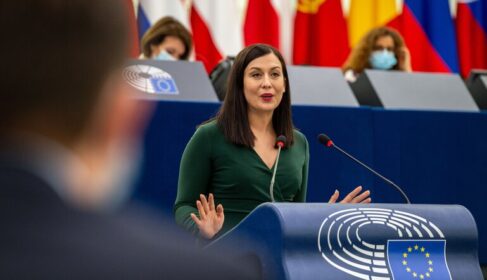 The fact that the person responsible for the anti-fraud report is Katalin Cseh, who is involved in a serious fraud case, only further discredits the European Parliament

MEP Jorge Buxadé underlined that he was part of the LIBE delegation that visited Hungary last September and saw with his own eyes that Hungarian democracy and the rule of law are alive and doing well, adding that European left-wing parties are threatening the sovereignty of Member States by interfering in their affairs in areas which, according to the Treaties, are none of the EU’s business.

Vincenzo Sofo stressed that his party fully supports Hungary and rejects any blackmail. He said the Delbos-Corfield report was another clear example of the European left doing everything in its power to prevent Hungary from accessing EU funds until it meets Brussels’ political conditions.

The two MEPs as well as other Italian, Polish and French MEPs strongly criticised the content of the LIBE report in an alternative opinion submitted. According to the document, the report is based on subjective opinions and politically biased statements; furthermore, it contains vague concerns and applies double standards.